With the festive season setting in, we round up the best Christmas markets in the UK and Europe. Plus where to go, what to buy and where to stay this December. 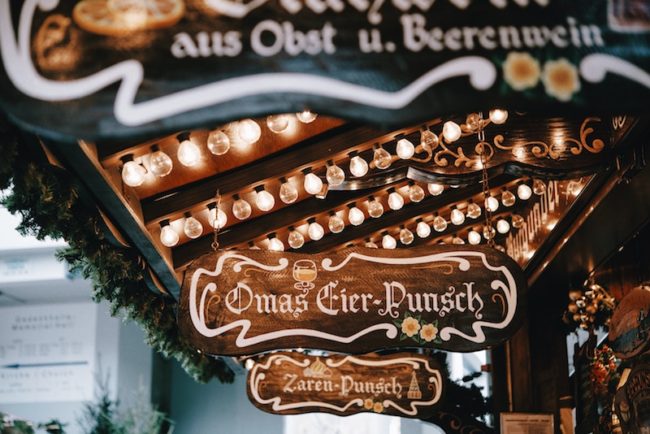 There’s something about this time of year that makes us go all goey inside (and it’s not just because we’ve indulged in one too many mince pies). The festive period can turn even the hardest cynic into a hopeless romantic. The cold, crisp air, cosy nights in by the fire and the promise of a date night beneath the dazzling Christmas lights really pulls at the heartstrings.

With festive romance and a gallon of glühwein warming our hearts, here’s a round up of the best Christmas markets, perfect for a date night in the UK or a romantic weekend further afield.

The Best Christmas Markets in the UK

It wouldn’t be a Christmas market round up if we didn’t kick things off with the grand master of German-inspired festivities. Winter Wonderland is back for another year of first date pandemonium and beer hall hilarity as Hyde Park is transformed into a Bavarian village with Christmas spirit spilling out of every hütte.

If the call of Bratwurst and beer steins weren’t enough to tempt you, there’s also an impressive rota of festive activities. From a Winter Wonderland Comedy Club and Bar Hütte Karaoke, to a display of A Christmas Carol in the Magical Ice Kingdom, there’s something for everyone (plus an ice bar for the scrooges to wait in).

Okay, so you may be paying over the odds for your Bailey’s hot chocolate. And don’t be surprised if the temptation of taking home a giant teddy bear throws your dignity (and change from £50) out the window on the arcade games. But can you really put a price on the very embodiment of Christmas in the city? We think not. 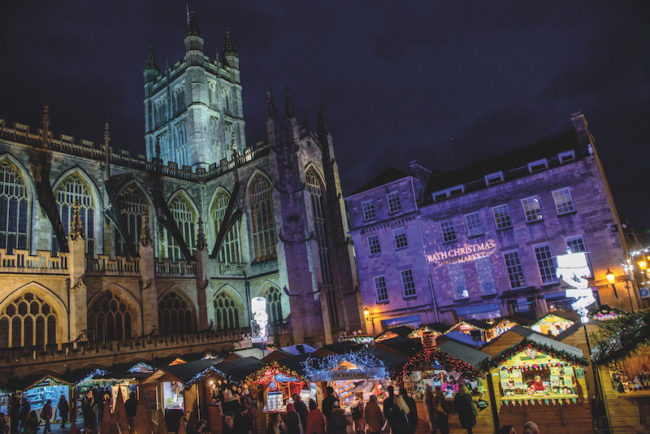 When it comes to Christmas markets in the UK, Bath is definitely up the OG. Set amongst swoon-worthy Georgian architecture, the market sprawls the quaint streets between the Bath Abbey and Roman Baths, transforming the city into a festive fantasy.

Get your skates on at Bath on Ice, before indulging in cocoa – or something a little stronger – at Abbey Hotel’s Après-Ski Bar or The Lodge found slap-bang in the centre of the markets.

Where to Stay in Bath

Tucked away in the old town, Eight is a boutique hotel with eight bedrooms and eight (there’s a running theme here) seasonal dishes. Book while you can as it’s a sell-out every year. 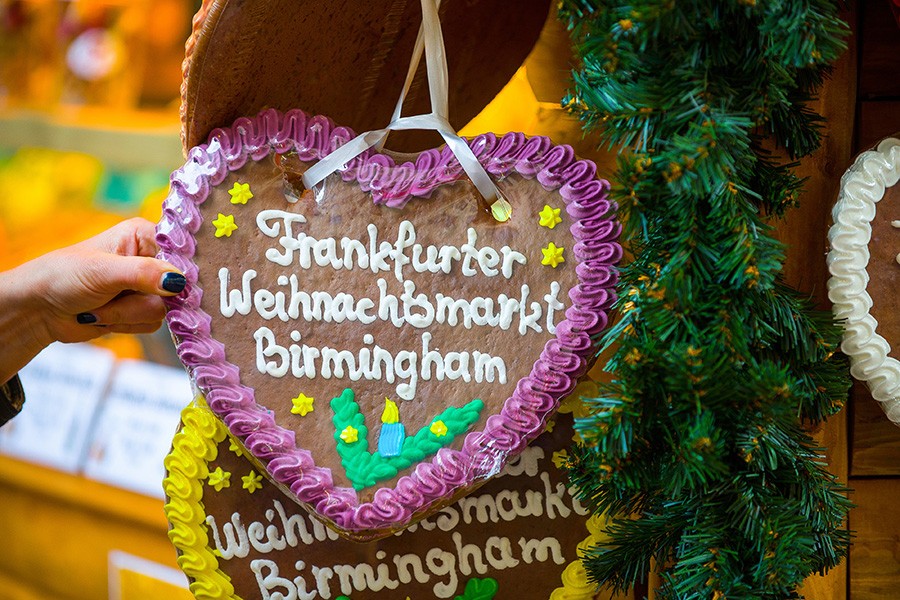 The largest German market outside of Germany and Austria, Birmingham’s Frankfurt Christmas market sprawls the city with more than 80 different festive stalls.

The market offers a large range of traditional goods and gifts, and a selection of tempting food and drink. Pretzels, schnitzels, bratwursts, and roasted almonds will tempt your tastebuds, all of which can be washed down with glühwein, weissbeer (a traditional wheat beer), or tasty hot chocolate.

Where to Stay in Birmingham

For optimum privacy and the freedom to spend your weekend exploring the markets at your will, we recommend the luxury serviced apartments at No.8 Waterloo Street. Found in the heart of the city centre, your walk to the hub of the Christmas markets will be a matter of minutes.

The Best Christmas Markets in Europe

Like timekeeping and pretzels, celebrating the festive season is something Germany excels at. So where better to go for seasonal feel-good vibes than the capital’s famous Christmas market?

From the end of November, the air’s thick with the scent of mulled wine and fresh waffles, and honeymooners will be spoilt for choice when it comes to Christkindlmarkt.

Where to Stay in Berlin

Just a stone’s throw from the major sights, the Regent Berlin has the added bonus of overlooking the legendary Weihnachtszauber market.

And with jaw-dropping chandeliers and oil paintings throughout, the hotel has an appropriately romantic feel.

The streets of Paris are always filled with sparkling lights and bright decorations at this time of year, as the French capital plays host to several Christmas markets throughout the festive season.

Head to Jardin des Tuileries this December, where rows upon rows of wooden huts will be serving up mulled wine, roasted chestnuts and delicious helpings of sausages and cheese. There’s plenty of stalls for arts and crafts, regional food specialities and handmade gifts, too.

Where to Stay in Paris

Stay in the centre of the Christmas festivities at the four-star Meliá París La Défense. The hotel’s impressive rooftop bar provides incredible views over the market, stretching to the Eiffel Tower and beyond. 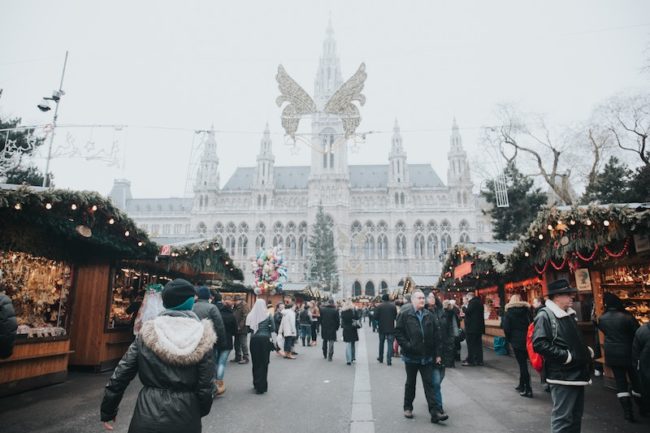 Expect to find a huge array of delectable treats and seasonal gifts at Vienna’s Advent Markets, with most opening their doors at the start of December through to Boxing Day.

For a traditional market experience, check out Christmas Village Maria-Theresien Platz, situated between the Museum of Natural History and the Museum of Art, where you’ll find a vast range of culinary delights and decorated market stalls.

Where to Stay in Vienna 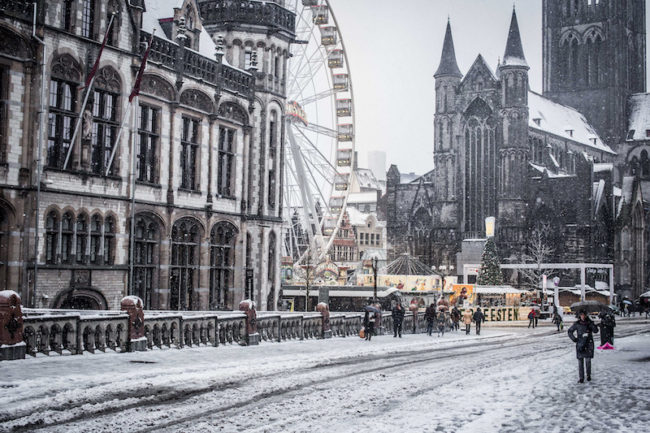 This increasingly Instagram-worthy Belgian hotspot comes into its own in December with a winter-wonderland makeover.

The Stadshal plays host to an impressive ice-skating rink, while retail therapy’s on offer at the BoterMarkt’s wooden huts. By night, ride the ferris wheel in front of St Bavo’s Cathedral for twinkling views of the city.

Where to Stay in Ghent

Located in the top floors of the city’s historic post office building, 1898 The Post offers guests the best views of Ghent. Newlyweds should book the octagonal Tower Suite high in the medieval turret. 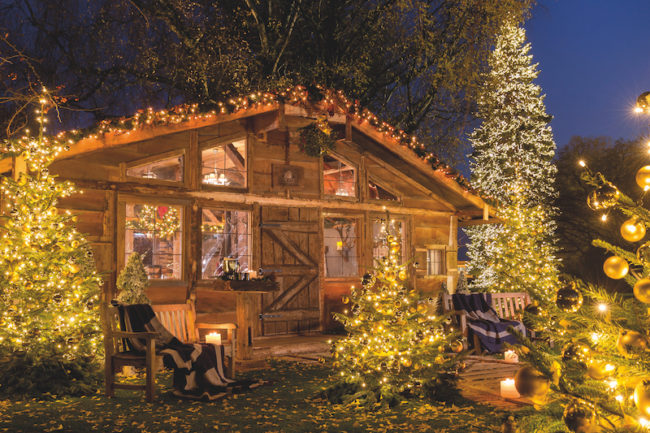 As November closes, Zurich comes alive with the sounds, lights and smells of Christmas markets. There are many to choose from in this Swiss city, including the train station’s festive fair – the largest in Europe.

For something a bit different, try Wienachtsdorf, with its upcycled gifts and ice rink, or Wiehnachtsmart, which is home to a ‘singing’ Christmas tree.

Where to Stay in Zurich

Renowned for its grand charm, Baur au Lac is an ideal base for exploring Zurich, as well as a handy stopover if you also plan to spend time on the slopes. Treat yourselves to Michelin-starred dining at its Pavillon restaurant.

Much like its Scandinavian counterparts, the Finnish capital is at its loveliest in winter; adorned in fairylights and perfumed with glögi, a spiced wine with almonds, raisins and an (optional) dash of vodka.

Soak up the atmosphere at the city’s 120-stall market and traditional Lucia Day processions; all olde-worlde touches that add to this destination’s romance.

Where to Stay in Helsinki

Continue the past-times theme with a stay at Katajanokka, a characterful converted prison with modern guest rooms that bely its former use. 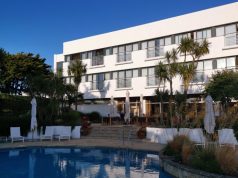 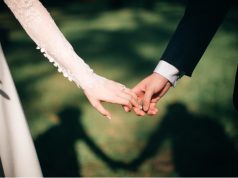 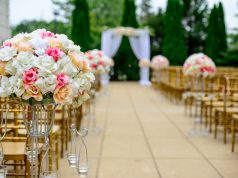 How to Start Handmade Jewellery Business From Home | Small Busine… 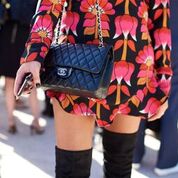 For Sale
Who isn’t a ‘bag’ person? Who of us never lusted for the bag of the season or searched in vain for that ‘sold...

What It Takes To Make A Wedding Cake…

5 Ways To Ensure An Unforgettable Wedding!…

5 Steps To Choose The Right Wedding Photographer For You…

A garden party wedding in the great outdoors for Chloe &...